Mail time: Sorting out the work done by a spring

The question asked of me, paraphrasing:

What is going on?

The first thought is to use the object-spring system: a system with a spring can have potential energy.  Then a quickly-sketched bar chart looks like 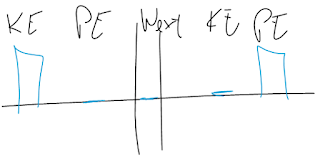 The “Wext” column represents work done by an external force.  In this case, there’s no work done by a force external to the object-spring system!  The force of the spring on the object is internal to the object-spring system.  The normal force and the gravitational force act perpendicular to the motion so do no work.  So, writing bars + bars = bars – that is, considering energy conservation, the total energy initially plus the external work done on the system is equal to the final total energy – you’ll see that the 160 J of kinetic energy at first become 160 J of spring potential energy later.

Okay, that doesn’t help – you’re supposed to find the work done by the spring.  So do an energy bar chart for just the object by itself:

An object by itself cannot have potential energy.  PE comes from an interaction… just as gravitational PE requires earth to be part of the system you’re considering, spring potential energy requires the spring to be part of the system.  So here, kinetic energy is the only possible energy!  KE at the beginning disappears because the object comes to rest.  By bars + bars = bars, the amount of kinetic energy plus the work done by external forces must equal zero.  Since the object had 160 J of kinetic energy, the spring must do -160 J of work on the object.

Each time you do an energy problem, define the system clearly.  Then use an energy bar chart.