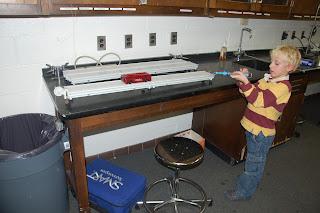 I had just introduced the idea of a force acting at an angle in my general physics course.  I needed an experiment for lab day.
In general physics lab, I want as often as possible to be able to make a linear graph, and use the slope or intercept to calculate a verifiable physical quantity.  The data collection process should be as simple as I can make it -- very little messing with computers, with minimal calculation before the linear graph appears. 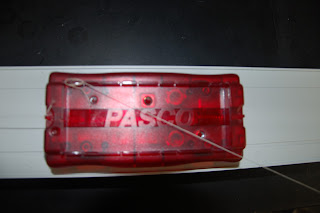 My first thought was to use the PASCO fan cart.  The fan can blow straight ahead, or can blow at any angle all the way to 90 degrees off of straight ahead.  If we place this cart on a PASCO track --  with grooves keeping the cart from sliding -- a spring scale attached to the front of the cart can measure the force the cart experiences in the direction of the track.  This force would be equal to the force of the fan times the cosine of the fan angle.  A graph of the scale reading vs. the cosine of the fan angle would make a line whose slope is the force of the fan.
Problem is, I have 22 students and 11 lab groups.  I don't even have two fan carts, let alone 11; that many fan carts would bust my budget.
After considerable brainstorming with some AP physics alumni, a new thought occurred to me... what if I could keep the angle of an applied force constant?  Look at the lower picture, the picture of the red PASCO cart.  This is one of the newer plastic "pascar" models.  It has several convenient raised thingamabobbers (that's a technical term) useful for attaching strings.
One string is attached to the middle of the left-hand side of the cart.  This string is passed over a pulley, and a hanging weight is hanged from the string.  A second string is held across the diagonal of the rectangular pascar, as shown in the picture.  The geometry of the pascar itself determines this angle -- students are instructed to ensure that the rope stays along the diagonal to control the angle.  A spring scale is attached to the angled rope.  The top picture shows the Nachoboy holding the spring scale at the correct angle; the hanging weight is visible above the garbage can.  Component analysis shows that the hanging weight is equal to the tension in the angled rope times the cosine of the string's angle.
Students vary the hanging weight, and measure the tension in the angled rope with the scale.  They graph the hanging weight vs. the tension in the angled rope.  The slope of this graph should be the cosine of the angle of the string!
Each student used the slope of his graph to figure out the angle of the rope.  I measured the angle with a protractor... I got between 21 and 24 degrees, depending on where the rope was anchored.  Those who did the experiment carefully (most of the class) got a slope of 0.90-0.95... giving an angle between about 18 and 25 degrees.  Woo-hoo!
GCJ
Posted by Greg Jacobs at 7:46 PM 1 comment: Links to this post 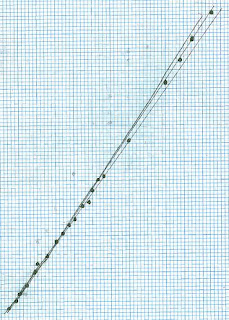 I spent last weekend in the company of about 25 AP physics teachers from Virginia public schools.  We had a good time discussing quantitative demonstrations and grading to a rubric.

One teacher asked me about the Archimedes Principle laboratory exercise that I've published.  Basically, I graph the amount of mass floating in a cup as a function of the volume of water displaced.  From the slope it's possible to get a value for the density of water.

This teacher was concerned... his students' measured densities varied all over the place, in many cases exceeeding the density of gold.  We talked about experimental technique, and I gave him some hints there.  (It's important to be absolutely sure the cup is filled to the brim.)  But he was doing a reasonable job with the procedure, and he shouldn't have had such a crazy spread of densities.

Then I asked him about his students' analysis.  I wondered how linear their data were.  It came out of the discussion that his students were measuring the displaced volume for just 4-5 different floating masses.  THERE'S THE ISSUE!

When my classes come to the first lab of the year, they expect to take 4-5 overly precise data points, and then spout some baloney about "human error" being why their result is lousy.  It takes a couple weeks of me riding herd and establishing the proper tone in order to get good, solid results.  Some of my rules for laboratory include:

1. No one leaves early; no one may work on anything but physics during the entire 90-minute lab period.  So there's no hurry to get done.

2. Data is placed directly on a graph as acquired. We do not make a table of values to graph later.  Why not?  (a) See rule #1.  (b)  It's hard to convince a student who's put everything away and *thinks* he's alredy done to do more work.  If they're graphing as they go, then it's easy to see when the graph looks complete, or in which range more data needs to be acquired.

3.  The standard for a "complete" graph isn't a certain number of points.  Rather, it's the "little brother" standard -- could your 6 year old little brother look at the graph and tell INSTANTLY whether it's a line or a curve?  And would all his little 6 year old friends agree with him unquestionably?  If not, more data is necessary.

4.  It's not acceptable to measure the same data point twice.  Consider a period of a pendulum experiment.  My students' instincts at the beginning of the year are to measure the period for five different lengths, and to time each length 4 or 5 times.  That's silly... why not just make a single measurement of the period for each of 20 different lengths?  Any "errors" in timing will smooth out over the entire graph.

5.  NO PUTZING.  Early on, I go through the class speeding the data acquisition process.  For example, partnerships will spend 15 minutes arguing whether to measure periods for every 5 cm of string length, or for every 10 cm.  If they had just started measuring, they would have had time to measure every 2 cm!

Look at the graph above.  I deliberately cut off the axis labels, becuase the issue is the number and linearity of the points.  Graphs for all experiments look this way.  Most of my experiments require a good hour plus for data aquisition.  That's time well spent, becuase then the analysis goes smoothly with minimal deviation from the answers I expect.  As the year goes on, data aquisition becomes smooth, effortless, and fast.

Try it -- lab should be a fun and relaxed experimental investigation, not a race to see who can just get the friggin' thing done first.

GCJ
Posted by Greg Jacobs at 12:06 PM 3 comments: Links to this post 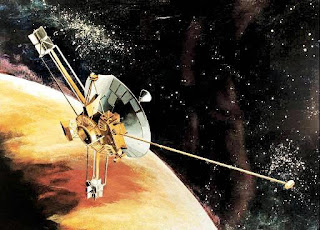 We've just finished covering Universal Gravitation.  Last night, my class did a problem involving a geosynchrous satellite orbiting Jupiter... they were to calculate the altitude of the satellite, and compare that altitude to the radius of Jupiter.

Today's quiz deals with conceptual issues from this problem, and reinforces Newton's Third Law (which we've been hammering for a week now).  I particularly like the last question, the ranking task -- it forces students to think beyond a single force pair.  They must combine their understanding of gravitation AND the Third Law.

Note that this quiz can be given in longer form or as a homework problem, just by adding the phrase "justify your answer" to the end of each question.

Space probe A orbits directly above Jupiter’s red spot, 9000 km above the surface. Identical space probe B sits on the surface of Jupiter.


27. Which probe has the bigger period of revolution?
(A) Probe A
(B) Probe B
(C) Both have the same period


29. Which probe has the bigger acceleration toward the center of Jupiter?
(A) Probe A
(B) Probe B
(C) Both have the same acceleration

30. Rank the magnitudes of the following gravitational forces from greatest to least. If two or more quantities are the same, say so clearly.

It's time to discuss universal gravitation.  Since quantitative demonstrations won't work here -- what, you want to hook a spring scale to the moon to verify the force the earth is exerting on it? -- I make some calculations with interesting results.
First, I calculate the gravitational field g, and show that g is still the same value at the top of Mount Everest.
Next, I calculate the force of the earth on the moon using universal gravitation.  We get 1017 N.  As a check on that calculation, I use circular motion (which we have just finished covering):  I find the centripetal force required to keep the moon in its orbit.  We get the same answer... and then we discuss how the combination of circular motion and universal gravitation allows calculation of all sorts of astronomical quantities.
A quiz a few days in asks to find the mass of the Milky Way galaxy, given the sun's orbital period around the center, assuming a two-body problem and circular motion. This calculation gives an accurate result, despite the crazy assumptions.
Throughout the unit I am modeling ORDER OF MAGNITUDE ESTIMATION.  I don't ever pound the calculator, and students are forbidden from having calculators on their desks.  Instead, I just write every calculation in scientific notation in standard units.  From that, I cancel powers of ten in my head, and write the answer to zero or one significant figures.  And, we check the reasonability of all answers where possible by direct comparison to known quantitites -- for example, if we calculate the mass of a star, we compare that to the mass of the sun.
Below are the instructions I write out on my problem sets for universal gravitation.  I follow through on my demands, too -- a problem without an order-of-magnitude estimate written out loses at least 3 out of 10 points.  The nebulous and meaningless statement "that's a really huge mass" rather than "that's 1/10 the mass of the sun, so reasonable for a star" loses 3 of 10 points.
Topics to be discussed: Newton’s law of universal gravitation. I find that, amazingly, the biggest trouble that students have when solving universal gravitation problems is plugging correctly into their calculators. To be sure you don’t screw up, follow this advice:
• Solve in variables as far as possible in each problem. Only plug in values at the end.
• Do an order of magnitude estimate of your answer without the calculator, to be sure you’re not way, way off.
• Check the reasonability of the answer. When you’re asked to make a comparison, do this right – don’t just say “that’s a big mass”, say “that’s twice the mass of the earth” or “that’s close to the mass of the sun”. Astronomical data is easily available online, and there are astronomical tables in all physics texts.
• I will be looking at comparisons VERY CAREFULLY on gravitation problems. Do these right.
Posted by Greg Jacobs at 9:14 AM No comments: Links to this post